Bitcoin’s latest rally, where the token came close to 2022 highs, blindsided a majority of traders hoping for a drop. Data on Monday showed that nearly $140 million worth of BTC short positions were liquidated in the last 12 hours.

Short positions in the crypto market had jumped over the weekend, with traders likely expecting consolidation after the market’s latest rally. Total market capitalization rose 12% to over $2 trillion in the past seven days.

A bulk of these gains have been attributed to improving institutional sentiment around crypto, which has seen several major hedge funds and Wall Street banks increase their exposure to the space.

Data from Coinglass showed total short positioning in crypto hit a one-month high on Sunday, as BTC and major altcoins appeared to have taken a breather from recent gains.  81% of the market was short on crypto in the last 12 hours, while 84% of BTC positioning was short.

But the market rallied in the early hours of Monday. 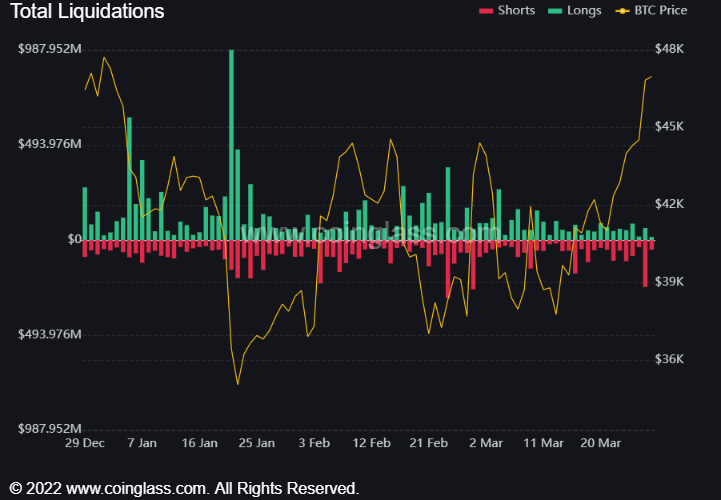 A bulk of liquidations occurred over the past 12 hours, with total short liquidation in the market coming up to a whopping $369 million. Exchanges FTX and Binance appeared to be hosting the largest number of short positions, while the single largest liquidation order happened on Bitmex, at $10 million.

Bitcoin traded above $47,000 for the first time since early-January, with traders now forecasting further gains. A new all-time high also may be in sight.

Interest in ETH has grown ahead of the blockchain’s switch to a proof-of-stake model, spilling over to several other ERC-20 tokens.

India To Opt Wait And Watch Policy Over Crypto Law

The rise of globalization and the digital economy as a result of the connectivity that the Internet affords has created an entirely new digital realm...