Bitcoin was trading at $11,500 on Monday as bullish traders eye another push to the $12,000 resistance. The move comes as data shows BTC bets by institutional traders near a record high.

The latest release of the Commitment of Traders report from the U.S. Commodity Trading Futures Commission (CTFC) showed a 9% rise in long positions by institutions, which is around the record high of 3,500 set in September. The data highlights the growing importance of BTC in financial markets.

BTC was higher over the weekend after finding support at $11,250 and the coin will now look to test the $12k level, which provided resistance on September 1st. Crypto prices could get a further boost from a fall in the U.S. dollar as the country’s lawmakers look to push through another stimulus package, which is likely to be around $2 trillion.

Another indicator of a potentially strong move in BTC is the implied volatility of options contracts. 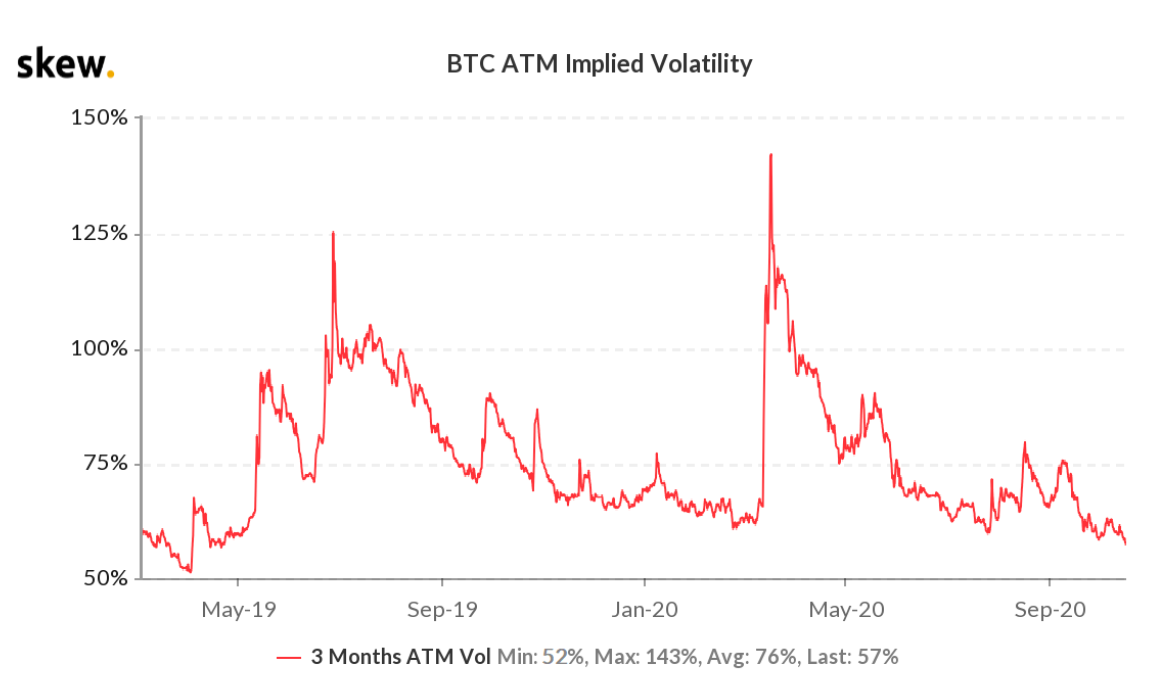 With volatility expectations at low levels, a strong move in either direction could catch markets off guard and lead to the liquidation of positions that are caught in the wrong direction. A move above the $12,000 level could see this happen.

The price of OKB was 25% lower on the week after OKEx, one of the industry’s largest crypto exchanges, suspended all cryptocurrency withdrawals. The company said that one of the exchanges key holders has “been out of touch” as they are, “currently cooperating with a public security bureau in investigations.” The news rattled investors on the back of the indictments of Bitmex owners.

OKEx CEO Jay Hao released a statement on Twitter to reassure users that, “All your funds and assets are safe.” Hao said the development would not affect the business but the continued fall in the exchanges native token suggests markets are wary with the token off 25% on the week.

OKB trades at $4.50 and has lost $100 million in market cap after the key holder news. The coin still ranks at 21 in the list of coins by market cap. The coin is the second-largest exchange token after Binance Coin (BNB), with the latter ranking number 6 in the overall market with a valuation of $4.5 billion. The OKEx news saw a dip in cryptocurrencies, including Bitcoin, but markets have since recovered.

BNB been a strong performer from the March lows and continues to trade near record highs. Binance Coin will continue to benefit from problems at other exchanges with OKEx and Bitmex seeing problems in the last weeks.

Binance continues to grow its platform with the project continuing to support the growth of the Binance Smart Chain network, with more crypto projects building solutions on the top of the Binance-branded smart contract blockchain. The company has also released its own Visa card in the U.S. and Europe, which features 8% cashback on purchases.

BNB is trading above the support at $27.25, which was the high in February before the virus sucked liquidity from the markets. BNB has slowly moved back up to that level and now targets resistance near $32.50 for further gains.

Waves was 25% higher on the week after news that the project was integrating the Solana coin into Gravity.

Solana becomes the first external addition to achieving Waves’ goal of mass adoption of inter-chain DeFi through Gravity. Through the latest integration, the Solana network will be available for data transfers between Gravity network participants.

As we strive to build an interoperable infrastructure capable of providing DeFi services across multiple networks, we are thrilled to announce the integration of the Solana protocol into Gravity, a decentralized cross-chain and oracle network based on the Waves protocol.

Gravity was introduced in June and the network aims to connect participating chains and the external world through each chain’s native token. In order to become a network member, users need to lock a certain amount of native tokens of the chain that they will provide data for.

As the project explains:

The network effectively resembles a PoW (proof-of-work) network where miners provide their computing power in return for block mining bonuses. The only difference here is that the Gravity nodes provide data, and get paid for that, in “established” currencies of the chains they work with.

Alexey Pupyshev, co-creator of Gravity commented on the Solana integration, saying it, “…enables developers to create universally connected dApps, with more opportunities for practical implementation and mass adoption of DeFi”.

Further growth in the Gravity platform should support the WAVES token and the coin has grown in strength with the DeFi buzz. WAVES trades near $3.00 after reaching highs around the $4.80 level in August and this would be the resistance level. Support comes in for the coin around $2.25.